The truth is pretty subjective because everyone believes THEY are telling the truth, that they are the RIGHT ones, that they know ‘what is what’.

I’ve pondered this over the years because I have considered myself ‘burdened’ with the sense –  and the mission, that seems to run entirely on its own agenda –  to be able to SEE clearly the non-truth and to call out what is not integral and what is not ‘right’. I say burdened, because most of the time I don’t enjoy this ability, and I don’t look forward to the inevitable backlash that comes my way when I speak up about something that is just not living up to what it says it is supposed to be – Something is fishy in fish town and it’s not looking too savvy, savvy?

But, the thing I’ve learned is that the truth never really needs anyone to to represent it, and the the truth usually speaks for itself. Once I figured that out I ceased to resent the ability to ‘see’ the truth in a situation and started instead, to collaborate with it.

Learn to not fear the truth, but to collaborate with it instead. ~ Kaare Long

[tweetthis]Learn to not FEAR the Truth, but to Collaborate with it instead. #JustReal[/tweetthis]

Being a ‘Truth Seeker, and ‘Truth Talker’ is not an easy gig, and I actually wouldn’t wish it on anyone. Often we don’t do well in large groups, we struggle with being the community ‘scapegoat’ and we have to work REALLY hard at staying above the negativity hurled at us to protect fragile egos. BUT – I strongly believe we are made for a reason, and we are who we are in order to keep the balance in the world. The ego is a pretty crafty adversary and I spend a lot of my own time dismantling its stories, its drama and it’s need to SEPARATE and VICTIMIZE me from the rest of the world.

All of us have the ability to be truth talkers, but when we are wounded it can be exceptionally difficult to strip away the barriers and armour that surrounds  and protects us to find the nugget of truth that will ultimately set us free. And I feel an 80’s song coming on…All those cliches about TRUTH had something going on there, and we all know it.

Recently, I found myself at the receiving end of a lot of negativity and hatred’ due to a piece I wrote about being an empath and body image. It was a piece that was written to empower women and it offered some skills I had learned and it also served up a lot of vulnerability on my part. I believe that our vulnerability is where most of the truth lives, and that is why many of us fight relentlessly to protect it. But what are we protecting?

I know for myself, this recent situation really brought out my own truth and my own fear. My post was censored and deleted for a reason that was very ambiguous –  and when I questioned further and insisted upon a decent communication around it, things started to go sideways. As this was a very public group, and it is supposed to be collaboratively owned and facilitated, I took this development to the group at large to pose the question why? Why are women censoring other women? I had followed guidelines of the group to the ‘T’ and still, someone had arbitrarily decided to delete my ‘gift’ of sharing for their own elusive reasons. Hmm..not cool, and something was  now stinky in Women Empowerment Town.

Because of my experience with this type of questioning that I do when I don’t quite see the truth in a situation, I was already bracing for the backlash, but I always keep a positive mindset for a mature and healthy conclusion to the situation. What resulted was anything but. My questioning assaulted the person(s) responsible for some reason, and I was accused of being a ‘bully’ – I find it interesting how that word is now used to, in itself – bully, other people. It’s a loosely used term now for some people, meant to frighten someone into submission for fear of the interweb police. I knew I wasn’t bullying, I was asking a valid question and it required a valid answer. Many of the group weighed in and started to have the same question. Others had been deleted, but not come forward. Others felt that this would set a precedent for FEARING sharing in the future. All in all, the leadership of this community was being anything but ‘inclusive’ with its actions against me, and then subsequent inaction when pressed for an answer.

What resulted from this was I was blocked entirely from the group, again not something I was surprised with and I was fairly relieved. I didn’t really want to be part of this group anyway after this situation. It was also clear that the person(s) responsible had used their power to;

This was a dictatorship, truthfully, and I didn’t want any part of it.

What did I learn from this? Quite a bit. Before I launch into the platitudes of ‘Stand your Ground’ ‘Know your Truth‘ ‘Be Brave and Stay your Voice’ I will first share my vulnerabilities about it, because THOSE are really the truth of the matter here, and those are the lessons to be had from this situation.

I realized through it all, that the reason I had been pulled into this in the first place, the reason I found myself there was my own need for healing my deep insecurities. As a Truth Talker, I have been subject to abandonment more times than I care to remember, and many of those times from my own parents and providers as a small child. This set up a precedent in my child mind that speaking my truth was dangerous. I needed those people to care for me, so if they withheld their support, love and care I would not survive. This is a basic, fundamental moment of decision and ‘wall making’ protection time for the ego mind.

As an adult, in this similar situation, where power is being used to suppress, manipulate and control –  my insecurity would directly conflict with my Truth Talker nature and the inner war would commence. This war is not for the weak, and it’s not for the fickle – a war like this can bring the strongest of us to our knees. It hurts and it has nothing to do with what we perceive is being DONE to us. It is our old programing from childhood insisting that we have broken the cardinal rule. We have gone against the PROVIDER – now we shall die.

Pretty dramatic. Ya, I know. But it was real inside, it was the truth playing out. And when I managed to stop deflecting and projecting  and essentially defending my LIFE, I was able to see that truth for myself and talk my own truth right out of me. 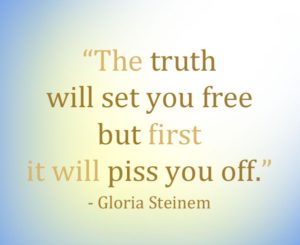 So what is the moral here, or the take away? I really don’t want to throw some cliche at you, but what I do want to do is let you know that you are not alone. Sometimes that is all it takes to urge us out from under our rocks and our hiding places. We need to know that there IS an inclusive community out there for us that accepts our Truth Talky and loves us even more because of it.

Do NOT BE AFRAID of yourself. This truth, this vulnerability will scare the shit out of people, and it will scare the shit out of you if you let it. This is why we all aim to avoid it as much as possible with sex, booze, relationships, food, smoking, or any other addictive escape – AND why we attack those around us who speak it, because they threaten our fragile walls.

I should probably add here that I’m no ‘expert’ in the field of addiction, but for f*$k sakes I sure as shit consider I have exemplary skills in it having been on that merry go round for most of my life. I am an expert in the game, and I am an expert in the inner dialogue. What I share here is MY experience and MY truth. This may not be yours, but that doesn’t matter one bit. It’s the TRUTH we are all looking for. And if one person starts telling it, maybe, just maybe, we’ll all start feeling comfortable saying it. To ourselves first and foremost, and to others – especially the ones we love.

For those leaders out there, finding your truth is even more important. Don’t you DARE go out there and assign yourself a leadership role without first being able to walk the gauntlet of vulnerability and truth. Shame, Fear, Ego and all those other icky things have no place in leadership – they are dangerous. So whatever you need to do to start speaking truth to yourself, start right now. Start the conversation and don’t be afraid of those trolls that will come out and try to censor you, try to delete you, try to block you – and those are just the ones that live inside your own head. When you’ve let them take up tenancy there, your outside world will reflect that back to you perfectly.

The world is a wonderful mirror to us of where we need to heal. Use these times as opportunities to draw out your own truth, and bring awareness of your wounds to the surface. Be compassionate with yourself. Once you start doing this, your external support will come.

For me, in this situation the support was there, but I chose to focus on the trolls a little too much because my insecurity started running the show. But, when I stepped back, told myself my own truth –  the whole situation just fell away. My supporters found me, and the energy shifted into one of creation and evolution.

It’s Not You, It’s Your Mattress – Endy, the New and True Canadian Experience, eh!

How Wise People Deal With Difficult People: A Guide To Break Free

Have a ‘Svelte Swagger’ this Summer!